Every now and then, it is fun to look at ordinary events in our lives and examine how law interacts with the event.   Halloween is one of those events.

Massachusetts was home to the Salem witchcraft trials. These trials occurred in 1692 in which 19 people were convicted of the crime of witchcraft and were executed by the Colony of Massachusetts. A 20th person was killed because he would not plead guilty or not guilty to the 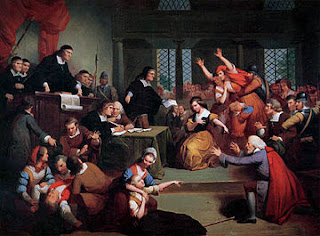 crime of witchcraft. These infamous trials have been taken to heart by the Town of Salem and Salem now considers itself the center of universe for Halloween celebrations.

While witchcraft was a crime in 1692 it is no longer a crime in Massachusetts. In 1693 the jails were filled with accused witches waiting for trials. All of the people who had been convicted of witchcraft were convicted on what was called spectral or spectoral evidence. This allowed evidence of spectres or visions to be admitted. People were convicted because someone had an unexplained medical condition. The legislature did not repeal witchcraft as a crime. Instead, the legislature banned the admission of spectral evidence. As a result of this change in procedures not a single person was convicted of witchcraft again. Massachusetts still prohibits the admission of spectral evidence in
court.

Today, Massachusetts doesn’t have any specific laws for Halloween. Witchcraft is not mentioned in the General Laws of Massachusetts. However, there are a number of laws that arguably relate to Halloween concepts.

Massachusetts has a Dead man’s act. Mass.Gen.L. c. 233, § 65. This isn’t as scary as it may sound. This law relates to use of statements of a dead person in a court proceeding. It is part of a rule of evidence known as the hearsay rule.

A number of states have court decisions relating to Halloween icons. A few are described below:

In 1991, a New York Court found facts to determine that a house was haunted. Stambovsky v. Ackley, 169 A.D.2d 254 (NY App. Div. 1991). The court reached this conclusion based in part on evidence that was spectral in nature. However, the court based its decision on traditional contract concepts.

In the United States, you can’t sue the Devil. Someone actually tried that. In U. S. ex rel. Mayo v. Satan and his Staff, 54 F.R.D. 282 (W.D. Pa. 1971) the court dismissed a lawsuit against Satan because as the principality of his own kingdom, he is beyond the jurisdiction of the courts.

While Massachusetts doesn’t have laws that specifically deal with Halloween, there are a number of laws that are important on Halloween night.

For many people, Halloween means parties. Parties, at any time of year, have the potential for legal problems. It is a crime to serve alcohol to minors. Mass.Gen.L. c. 138, § 34. If a person drinks too much at a party and then drives and has an accident, the host of the party can be sued for the resulting injuries. This is known as social host liability and exists in Massachusetts. Most towns have ordinances that prohibit parties from making too much noise late at night. Usually police give a warning when they first arrive at the home where a noisy party exits. However, they may have the power to arrest for the offense of making noise late at night.

Halloween celebrating can result in some people drinking and driving. Massachusetts prohibits operating a motor vehicle under the influence of alcohol. Mass.Gen.L. c. 90, § 24.

Halloween should be a time for fun.  Have a happy Halloween and make sure you don’t move any dead bodies, do any illegal tricks, or party too hard.  If you do any of these things, you may have to hire a lawyer which could be scarier than any costumed person who shows up at your door.